The title sounds repetitive, doesn’t it?

So the lovely Shannon @ Leaning Lights is the host of TBR Takedown and it’s a relaxed readathon where you can read whatever kinds of books you want.

There are also four challenges that are totally optional, and they are:

Alright, so let’s get to the TBR!

I’m going to read something from each of the challenges, but I think I may combine two of them together, and then the other two together, for a total of two books.

This Is Where It Ends by Marieke Nijkamp 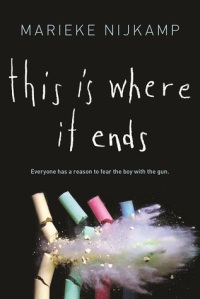 10:00 a.m.
The principal of Opportunity, Alabama’s high school finishes her speech, welcoming the entire student body to a new semester and encouraging them to excel and achieve.

10:02 a.m.
The students get up to leave the auditorium for their next class.

Told over the span of 54 harrowing minutes from four different perspectives, terror reigns as one student’s calculated revenge turns into the ultimate game of survival.

This sounds like it’s going to be a very controversial book, but I’m definitely interested to see how it goes and if I like it. I’m hoping it’ll be a fast read as I have work and Camp NaNoWriMo that I’m participating in.

The second book I’m combining the other two challenges: Catch Up in a Series & Been On the Shelf 5ever. 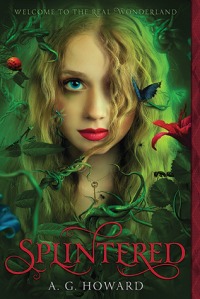 This stunning debut captures the grotesque madness of a mystical under-land, as well as a girl’s pangs of first love and independence.

Alyssa Gardner hears the whispers of bugs and flowers—precisely the affliction that landed her mother in a mental hospital years before. This family curse stretches back to her ancestor Alice Liddell, the real-life inspiration for Lewis Carroll’s Alice’s Adventures in Wonderland. Alyssa might be crazy, but she manages to keep it together. For now.

When her mother’s mental health takes a turn for the worse, Alyssa learns that what she thought was fiction is based in terrifying reality. The real Wonderland is a place far darker and more twisted than Lewis Carroll ever let on. There, Alyssa must pass a series of tests, including draining an ocean of Alice’s tears, waking the slumbering tea party, and subduing a vicious bandersnatch, to fix Alice’s mistakes and save her family. She must also decide whom to trust: Jeb, her gorgeous best friend and secret crush, or the sexy but suspicious Morpheus, her guide through Wonderland, who may have dark motives of his own.

This has been on my shelf for probably a year and a half now, and as it’s the first book in a trilogy, I think I should read it. Since reading Alice by Christina Henry, I’ve been thinking about reading this one, so I’m excited to get to it.

And that’s all I have for this weekend TBR! I’m hoping I can finish both of them in the three days, but I’m not going to worry too much about it. I’ll let you know how I did in a wrap-up post next Monday.

Are you participating in TBR Takedown? What books do you plan on reading? What’s your most anticipated read for this readathon? Let me know!