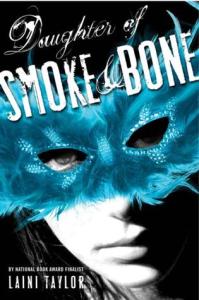 “Daughter of Smoke and Bone” by Laini Taylor is the first book in the Daughter of Smoke and Bone trilogy. It’s a story about a girl named Karou living in Prague, going to art school and doing just fine. Kind of. Her boyfriend cheated on her and she is just having a really rough time, but there’s something about her natural blue hair and super fantasy-esque drawings that make her stand out from the crowd.

Maybe it’s the fact that she lives a secret otherworldly life on the side. Yeah, that could be it.

Karou was raised with chimera, a type of mythical being who is forged of many different types of creatures (human head/torso but with the legs and body of a horse, like a centaur). So that world isn’t really that surprising to her given that she was raised in it. So she’s often given tasks by one of the chimaera, Brimstone, and carries out these “tasks” to get teeth – all varieties – when one day she goes to Morocco and is discovered by an angel. An angel who wants to kill her.

This story, man. This story. At first I wasn’t sure I was going to like it. I thought it was going to be a poorly written, all over the place, insta-love type of thing, when really, it wasn’t. There was so much more going on in the background that was woven in and throughout the novel that it just took my breath away.

Literally, I’m feeling ALL the feels.

Karou, herself, is a strong female character with a stubborn streak, but also a quirky attitude that seems to get her in trouble from time to time. She grew up without knowing much about herself or how she got tattoos on her hands (hamsas) and she always wondered why she’d feel lonely at times or just how she didn’t feel like she was her true self in the world she was living in. I thought she was relatable because I know a lot of teens and young adults feel “out of place” in the world and want to find who they are and where they fit in all of this. Karou is like that throughout most of the book and she doesn’t really change much in personality, which is great.

Akiva is the angel who attacks Karou in Morocco and he is described as dead-eyed in the beginning, his features too perfect to be human with short cropped dark hair, a widow’s peak, and burning angel wings that he can glamour into invisibility – but only on his back, not on his shadow. He’s at first merciless and cruel, but something in him clicks when he attacks Karou that makes him pause and he tries to figure out just what that is by following her around (yes, like a creep). Though the two do spar later on, he doesn’t want to hurt her and he later figures out why he is so drawn to her and why he can’t hurt her.

And possibly why she’d want to hurt him.

Brimstone is a chimera who is a Wishmonger that makes different types of beads that grant different levels of wishes. He’s stonefaced and not very warm to others, only showing his approval through grunts on occasion. We do learn a little bit more about him toward the end of the book and I think he’s pretty wise, though that may be due to his age.

Those were really the main characters of the book while everyone else that followed was secondary. I did enjoy Zuzana’s personality a lot (she’s human), and Issa was kind of cool (she’s a chimera).

The plot of the story definitely pulled me in. It was one in which Karou was trying to find who she was while trying to uncover secrets as to why portal doors have mysterious hand print burn marks on them and why they suddenly go up in flames, taking away any chances she had of returning to that place in between. It also is a great mystery into the chimera and seraphim (angel) world. I really enjoyed it and I can definitely see the potential for the sequels from this book.

The romance in this book, at first, I thought would be insta-love the way it was playing out. It kind of turned me off, but as it continued and it was explained further in the story I finally understood why they acted the way they did toward each other. It was hot and steamy and ooooohhh the angst, but it was great to read and definitely satisfied my romantic craving.

And I hope to God there isn’t a triangle.

My biggest “complaint,” which is really a critique is that I wish that the back stories that we find out later about Karou’s past were woven into the story more as memory snippets. It happened only once or twice before that, but I think that it could have happened a little bit more rather than it all coming in one giant chunk toward the end.

Overall, I really, really enjoyed this book and I can’t wait to continue on reading the trilogy. I gave this 5/5 stars.

7 thoughts on “Daughter of Smoke and Bone Book Review”