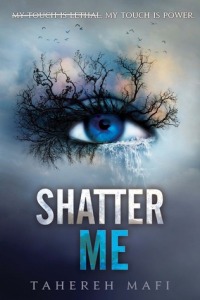 “Shatter Me” by Tahereh Mafi is a story about a girl named Juliette whose touch is deadly. She grows up being hated and feared by everyone, even her parents. When she is sent to the Reestablishment to be held as an insane asylum client, her world becomes different and changes upside down. She counts the minutes and seconds until the day a boy named Adam is also put in her cell, until the day she is essentially captured, until the day she becomes free.

This is a young adult dystopian novel about survival and self discovery. It was an interesting and fast read and I was enthralled by the writing style Mafi uses throughout the book. It is unique in that it is a conscious stream of thought and many of the words and sentences are crossed out as though Juliette takes back those thoughts before they ever come into fruition. It’s definitely unique, as well as the amount of metaphors used throughout the novel. I don’t think it took away from the story, but rather enhanced it and added a bit more imagery for the situation at that current moment.

Overall, I am excited to read the rest of the series, but like many other reviews I’ve seen, I had a few problems with it:

Now that isn’t to say that this book didn’t have it’s benefits, too. I did enjoy a lot of this book, such as:

So, this book had both ups and downs, but I overall enjoyed it and hope the second book gets even better and that the plot is expanded upon.

4 thoughts on “Shatter Me Book Review”