Hey peeps! So I just wanted to give an update as to what’s been going on in my life and in many parts of my life, especially in this upcoming month of November.

Today, November 1st, marks my one year wedding anniversary! I can’t believe a year has already gone by since I married my best friend. It’s been such a fast year and it’s been a good one at that. Today we’re going to be out and about going to restaurants and shopping (of course Barnes and Noble will be included in the shopping) and possibly star gazing, so it’s going to be a really fun time. Here’s one of the pictures from our wedding day last year: 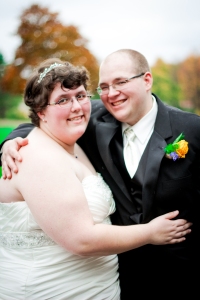 Okay, last month was an epic fail in terms of reading. Even though I still managed to read something, I feel so lacking! I miss reading and diving into worlds and getting attached to characters. So for the month of November I think I’m going to try to read at least three books, even though this month is going to be crazy with NaNoWriMo and all that. BUT I do have the first week off for vacation from work, so yay for that! We’ll see how much I get done. My “currently reading” pile keeps getting bigger and bigger because I keep starting books and putting them down, so I really need to power through them.

On my currently reading pile (which is just a stack on my shelves) I have twelve physical books that I have started and have yet to actually finish. Some are more read than others, but I’m still a fail in terms of having come anywhere near finishing them. I’m going to just try to read what interests me most because I really don’t want to pick up another book and get stuck again.

And this doesn’t even include all of the e-books and audiobooks I have yet to finish, either…

I’m a mess. Which book do you recommend I finish reading first? I’m kind of leaning towards Goblet of Fire or Magic Strikes.

Speaking of NaNo, I’m participating this year! If you don’t know what NaNoWriMo is, click here to read my post about preparing for it. I actually decided that I’m going to continue writing the story I was working on during Camp NaNoWriMo earlier this year and so I’m happy with my decision to do that; I’ve been putting it off for so long and I really just want to finish it – at least the first draft. So wish me luck because it’s going to be one interesting month.

Check out my profile to become my writing buddy and see what I’m writing! I’ll most likely update the synopsis some time this month, but you can check out an excerpt there.

Okay, so life seems to slowly be getting back on track in terms of work. I’ve been working six days a week full-time over the past two months, and I’m just exhausted. Having a week off from work is exciting, but I also have no idea what I’m going to do with myself… other than read and write, of course. But I am excited that I actually have Wednesdays off again (as well as Sundays, as always), so that’ll be nice to be able to just have a day to do whatever I want.

Also, someone decided to dent the hood of my car. I’m really annoyed by it – I don’t even care about having them pay for the damage, I just want an apology and an explanation. But I probably won’t get either, but we’ll see if maybe my landlord can help out with security footage and all of that.

So I finally decided to bring my bird, Yoshi, to the apartment and I am so happy I did! He’s much happier now, I think, especially since we upgraded his cage, gave him a lot more toys, different perches for his foot health, and just… I’m happy! I’m finally taking care of him the way I’ve wanted to for years but have been prevented mostly by my parents (not that they were being mean about it). So yay, birdie! Here he is: 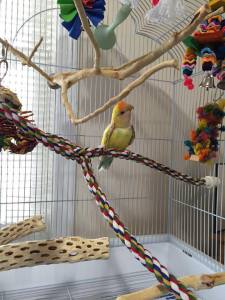 He’s a lovebird, and no, he does not need a buddy with him despite common misconception. He isn’t hand tamed, but he’s got a great personality for handling, so I’m hoping that with time and patience I’ll be able to become his friend.

If you want to see updates with Yoshi and our journey of becoming friends, you can check out our tumblr!

Alright, so I’ve really kind of neglected this blog in the last month; I think part of it is because I didn’t have much to say and the other part was just not really reading much or being part of the community as much. So sad to think, really. But I’m going to do my best this month to update weekly with NaNoWriMo updates, as well as anything else I can think of! I really want this to be a fun, engaging, and interactive place for you guys, so please let me know if you have any suggestions for topics, blog posts, or books! I’d love to hear them.

I believe that’s it for updates! I’ll do them every now and again to keep you guys in the loop and to just get some things off of my chest every now and then, because who doesn’t need that every once in a while?

But yeah, please let me know if you have any suggestions for blog posts or topics, as well as what I should read first from my list up above. Thanks a bunch and have a wonderful day!

One thought on “All the Updates! | NaNoWriMo, Anniversary, Reading, Life, & Blog”