Oh hey, I forgot to update last month, but since it’s still the very beginning of this month, let’s talk about the anime I’ve watched since my last Anime Rewind.

Shows I Continued from Last Time

Now let’s move on to some of the stuff I didn’t talk about last time that’s new this time. 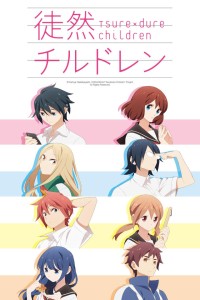 Tsuredure Children – episodes 1-5, ongoing – So. CUTE. And SO funny. This is an anime about several different couples and how they have crushes on one another and how they start (or don’t start) dating and it’s adorable and funny and my friend got me hooked so I blame her for this and just… Go watch it. You won’t be disappointed, I swear.

Kiki’s Delivery Service – Okay, I’ve seen this movie a million times and I already own it and all of that, BUT. My friend (who I mentioned above that got me hooked on Tsuredure Children) decided to surprise me with a girls’ night out to go see the JAPANESE DUB of Kiki in THEATERS. I was SO excited to see it on the big screen because it’s one of my all time favorite Studio Ghibli movies and it was so cool to see the Japanese version and how the subtitles and speaking differentiate from the English version (because I’m clearly obsessed and know how some of the lines go). I love this movie in itself because it’s about a young girl witch who leaves her family (as is tradition for young witches her age) to study for a year alone in a town of her choosing. And though there are many ups and downs for Kiki along the way, the ultimate experience she has is a positive one. Ahhh, it’s so cute and good and I love it and you should all watch it if you haven’t. 5/5 stars.

I clearly haven’t watched a lot of new anime this month, but I’ve watched some good ones that I’ve talked about before and I can’t wait to see what I watch this month.

What have you watched recently? What’s your favorite Studio Ghibli movie? Let me know!