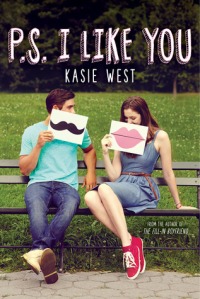 While spacing out in chemistry class, Lily scribbles some of her favorite song lyrics onto her desk. The next day, she finds that someone has continued the lyrics on the desk and added a message to her. Intrigue!

Soon, Lily and her anonymous pen pal are exchanging full-on letters—sharing secrets, recommending bands, and opening up to each other. Lily realizes she’s kind of falling for this letter writer. Only, who is he? As Lily attempts to unravel the mystery and juggle school, friends, crushes, and her crazy family, she discovers that matters of the heart can’t always be spelled out…

This book was adorable and it was nothing short of what I was looking for in a contemporary novel. I found the characters to be funny and real, the plot to be fun, realistic, and fast-paced.

The story started out with Lily being distracted in Chemistry class writing down lyrics in her notebook and her teacher telling her to pay more attention and turn in notes at the end of every class. When she starts to daydream and write lyrics on the table, the next day she sees those lyrics completed and she starts writing notes back and forth from there. For a large portion of the book the mystery of who was writing the notes was well hidden and she didn’t figure it out until about half way through who it was when she saw him while she was running errands for someone.

I thought that Lily was a great character. She was awkward and funny and kind, and she loves her family unconditionally, as well as her best friend Isabel. I love that she had some quirks that allowed her to be seen in a more realistic light, like how she has a nervous habit of chatting up a storm when she’s really nervous or put in an awkward situation, or how she’ll resort to humor – even if no one gets her humor sometimes. I loved that about her. (Probably because I do the same thing.)

Having her large family have such a big presence in the book was something I wasn’t expecting, and I thought that that was such a great part of the book. Of course she thought her family was difficult and everything to live with, but as an outsider I thought that her family was fun and very entertaining. With an older sister and two younger brothers, plus both parents, her house wasn’t short on fun. I also loved the way she talked to her siblings: like she cared and was patient with them. Of course there were moments of frustration, but she still really just showed how much she cared, and that they cared back, and I loved it.

Cade was interesting because when I thought he was being an arrogant dude, trying to make jokes and be humorous, it was his way of trying to make situations better for others. He has just as much of a big heart for people as Lily does, which makes my own heart warm. Not only that, but even during their fights I could tell that he wasn’t totally in it, and that there was something he wanted to say – especially as time went on. He was kind and funny just like Lily, a very great match for her.

Of course that’s not to say neither has their faults. Even when they fought and when their anger was explained, I still was kind of confused as to why they fought to begin with. Maybe it wasn’t explained, or it was and I missed it, but I thought that the hate-to-love romance that happened was gradual, realistic, and the cutest thing ever. *insert fangirl squeal*

I also appreciated the friendship between Lily and Isabel in here because I don’t often see YA friendships between characters stem out more than just a side role. But Isabel played a big role in Lily’s life and Lily often said that Isabel was much more important than some of the things that were going on, which was awesome.

And there was of course mini dramas here and there with the letters, another girl, and even with Isabel, but I like how things resolved themselves and how each character worked to fight for the important relationships to stay intact. It was mature of them all, and I was glad to see that.

I thought that this book was very adorable and that you should definitely check it out if you’re looking for a cute contemporary to read anytime soon.