Welcome to another Top Ten Tuesday as hosted by the lovely people over at The Broke and the Bookish. Today’s topic is centered all around villains and we could pretty much pick whatever topic we wanted under that umbrella, so since I was having such a hard time thinking about book villains, I thought I’d talk about some of my favorite movie ones! I find that villains really enhance the story, and sometimes I can’t help but find that they become some of my favorites. 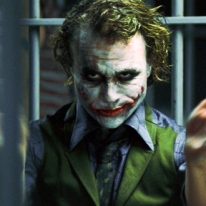 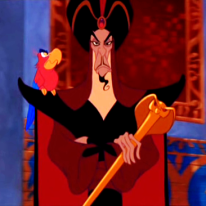 1 . The Joker from The Dark Knight – I love Batman. He’s my favorite superhero and as such, I loved these movies. They were brilliantly done and I absolutely loved Heath Ledger as The Joker. He was crazy, violent, creepy, and the perfect Joker, in my opinion.

2. Voldemort from the Harry Potter franchise – Now I grew up with this movie franchise like a lot of people grew up with the books. The first movie came out when I was ten and since then I have seen each movie many times and I never get sick of them. Voldemort is cunning, manipulative, scary, and a great villain. I feel like he’s portrayed well in this adaptation and I hope that as I continue to read the books that I’ll continue to see him get even badder.

3. Jafar from Aladdin – Jafar is an amazing villain. I love how he’s trying to squeeze his way into the Sultan’s place, how he uses his wits and cunning to get him places (and also the magic scepter helps), but I also like that he gets annoyed by Iago and things that people say, and he’s kind of creepy and greedy. But he’s still one of my faves.

4. Ursula from The Little Mermaid – I’d hate to be one of the poor unfortunate souls that go to her for any sort of help because she will not hesitate to ruin anyone’s happiness in the blink of an eye. I like that she’s driven to obtain a goal and that she uses a lot of sarcasm when she talks.

5. Maleficent from Sleeping Beauty – Now I really like the live action version of Maleficent, but the original Mistress of All Evil holds a special place in my heart. I find that her cruel intelligence and a need to destroy anyone because she wasn’t invited to a party is brilliant. She’s truly the Queen of Darkness of my heart.

6. Darth Vader from the Star Wars franchise – *breathes like Vader* I mean, do I need to say anything else? Okay, well, I grew up with this franchise too because my dad is a huge fan of it, plus he’s just a super strong villain with a tragic past and he’s all kinds of cool. 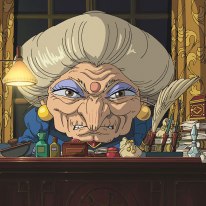 7. Gru from Despicable Me – Okay, so Gru is more villain-turned-good, BUT STILL. He’s funny, he tries his hardest, he has a really sweet caring side, and I just think that despite all of his mistakes and upsets, he’s a great villain and adoptive dad.

8. Bane from The Dark Knight Rises – Bane is just pure anger and I think that’s what makes him so appealing. He’s strong, he tries to use fear as a motivator, and when that doesn’t work, he breaks people – literally. I think that that’s just one of the best qualities in a villain: that they’re not afraid to get the job done one way or another.

9. Yubaba from Spirited Away – She’s creepy AF, but she’s also cunning and twists what you say around to trap you. I think she’s a classic kind of villain and maybe that’s why I like her so much. Of course, I like her twin sister more because she’s good, but we’re talking villains here, and Yubaba is fantastic as one.

10. Hades from Hercules – Ah, the sarcastic god of my heart. Hades is hilarious and doesn’t take things seriously, and when he’s fired up he’s literally fired up. I love his humor because it breaks up the seriousness of the movie, but he’s also got a devious side to him and I love it.

So there are some of my favorite movie villains! I know it was very Disney-centric but I was having the hardest time thinking about other characters. Seriously. But I do love each of these villains in their own ways.

Who are some of your favorite movie villains? Do you like any of the ones on my list? Do you prefer a villain to be completely evil, or have some sort of redeeming quality about them? Tell me all the things!