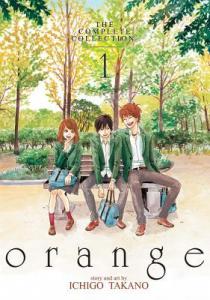 A Plea From the Future

On the day that Naho begins 11th grade, she recieves a letter from herself ten years in the future. At first, she writes it off as a prank, but as the letter’s predictions come true one by one Naho realizes that the letter might be the real deal. Her future self tells Naho that a new transfer student, a boy named Kakeru, will soon join her class. The letter begs Naho to watch over him, saying that only Naho can save Kakeru from a terrible future. Who is this mystery boy, and can Naho save him from his destiny?

There are trigger warnings for depression and suicide and there are spoilers below.

From the characters to the story to the art, I found that each part was expanded upon and really thought over carefully as the story grew and we got to learn more about these characters and just why it is they have to save Kakeru.

Naho, our leading lady, was kind of like your typical shoujo heroine who’s very modest, easily embarrassed, but has a big heart. She cares very deeply for her friends and doesn’t want anyone to get hurt – emotionally or otherwise. I thought that she was very cute and that she did her best to help her friend (who she obviously developed feelings for). I wish she had been more brave at times and had acted as the letters suggested, but I also know that it’s not in her nature to be as brave as she was sometimes.

Kakeru, the main focus of the story, deals with a lot of depression and suicidal thoughts after his mother commits suicide on the day of the entrance exams when he doesn’t return home right after school. He blames himself and, as a result, he holds in his feelings, not sharing with his friends. In the future world (10 years in the future), he is no longer there with them, and they all reflect back on him not being there and what they could have done to save him. In the past life, his friends are changing the future, and as a result he ends up enjoying life a lot more, but he’s still very depressed and puts on a smile so his friends don’t worry. But when they do push and ask him very serious questions, he does eventually break down and tell them some of what’s bothering him and I think those were some of the most important parts.

Suwa, Hagita, Azu, and Takako, the other friends in the group, all try to cheer up Kakeru even though they don’t fully know why they’re doing it just yet. I love that they all try their best to be supportive in whatever way they can and that they don’t back down and let Kakeru drown in a spiral of darkness.

The plot of the story was one that had me reeling from so many emotions. I laughed, I cried (more like sobbed), I was angry, joyful… So many emotions were packed into this first large volume that I felt like this was a story written for me. I loved seeing the progression from the past and the future, to see where they were ten years in the future, how they were living their lives, why they came together, and how they wanted to fix it. And then their past selves, though doubtful at first, really took the letters’ advice to heart and implemented as many changes as possible. It was so inspiring and beautiful.

There was, of course, romance as this is a shoujo manga (girl’s manga, aka, here there be romance and cuteness), and though it was subtle, it was still there and so darn cute. The feelings grew slowly and steadily, and just like any school crush, it was difficult for either party to really speak their feelings. I feel that, if they had, it would have made it just a little bit easier overall.

Overall, my favorite aspect of this book was the friendship because it is such an important element in this story. Not giving up on your friends or taking sides or anything like that. It was all about trying to make one friend happy, yes, but they were all doing it because of how much they care for Kakeru.

This first volume is definitely 5/5 stars and I extremely, highly recommend it. 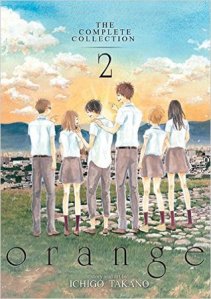 Everyone has regrets in life. So who wouldn’t take the chance to change the past if given the opportunity? When sixteen-year-old Takamiya Naho receives a mysterious letter, claiming to be from her twenty-seven-year-old self, her life is suddenly thrown into flux. The letter informs her that a new transfer student by the name of Naruse Kakeru will be joining her class, and to keep her eye on him. What is Naho to make of the letter’s contents and its cryptic warning?

Orange: The Complete Collection 2 also includes a bonus story, Haruiro Astronaut. This five chapter story is about a pair of twins who discover that they can’t share everything in life – or at least not an alien that suddenly becomes a part of it.

In this second volume, we pick up the story right where it was left off and we find out that all of the friends received letters from their past selves. They all work hard and come together to try to make Kakeru’s life as happy as possible. Of course, sometimes they couldn’t rely on the letters because the events happening in their timeline was different from their future selves’ timeline. Sometimes it would make things worse, but other times it would make things better, and sometimes events would align and they could follow the letters’ suggestions.

Naho really tries to make an effort to express her feelings to Kakeru in this novel, and it does make him happy, until a slip up that causes his thoughts to spiral and he doesn’t want to hurt her anymore and, therefore, turns away from her. This causes a downward spiral that they were hoping they could control, but it ends up happening anyway.

These times were the toughest to read because, as someone who has had similar experiences, once we dove into Kakeru’s point of view and saw his thought process, it was very similar to ones I have had before. When we relived the past Kakeru’s life, it was very saddening, but it also showed just how much the group of friends had come to that point to really make their Kakeru happier and change the outcome to the best of their abilities. I thought that this was a very powerful move and one that was well handled.

The ending, of course, made me burst with happiness. It was so beautiful and heartwarming and it shows just how strong friendship can be; how strong love can be. I absolutely loved this series and thought that it was really well done and showed accurate representations of depression. It’s easy to put on a smile for the world when really you feel like you’re dying on the inside. For Kakeru, this was all too true, and I’m so glad that the friends were able to help him in one timeline even if they couldn’t help him in another.

Also, there was a a bonus five chapter story with different characters called Haruiro Astronaut.

This short story followed twin girls, Chiki and Mami, and how Mami always has the boys falling in love with her, and Chiki’s never really had a crush on anyone before. It’s a cute, hilarious story about the girls’ falling for guys, but it mostly focuses on Chiki and I loved it!

I felt that Chiki and Mami were very different personalitywise even if they were very similar in looks. Chiki was more like the mother hen, always looking out for others – especially Mami – whereas Mami is much more like a child and needing to rely on others.

When Mami introduces Chiki to a hot, smart basketball player, Yui, Chiki finds out that Yui likes her sister. So when those two start going out, we’re introduced to two other characters: Tastuki – Yui’s best friend from childhood – and Taskuoki – a kid from Chiki’s class who claims to like Mami, but really…

Let’s just say: hilarity ensues, there was a lot of laughter (A LOT), and it was adorable and really helped to lighten the mood after reading Orange. It was very cute and heartwarming, and I need a whole series just about these characters, please and thank you. This short story is a definite must read and I rated it 5/5 stars, too!