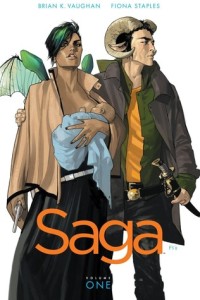 When two soldiers from opposite sides of a never-ending galactic war fall in love, they risk everything to bring a fragile new life into a dangerous old universe.

From bestselling writer Brian K. Vaughan, Saga is the sweeping tale of one young family fighting to find their place in the worlds. Fantasy and science fiction are wed like never before in this sexy, subversive drama for adults.

I wasn’t sure what I was expecting when I went into this graphic novel series, but I was quickly captured by it. The story of two races who are at war with one another, and one from each side who falls in love and have a child together, is not an uncommon story, but the way Vaughan weaves it alongside the beautiful illustrations of Staples makes it a spectacular story.

I thought that the art itself was beautiful in each volume, capturing the essence of the story while giving just enough to understand the emotions being emitted or the situation at hand.

Alana, the female heroine, is kind of a hot mess. She’s fiercely protective of her child and she loves her husband, Marko, very much and would die for either of them. She’s a headstrong woman, very sarcastic, and she knows how to kick ass.

Marko, the male heroine, is a solider who vows to never use violence again – it can overtake him and control him rather than him being in control. He loves his family intensely and would do anything for them.

I think that these two, along with several other that we meet along the way, are what makes this story incredibly unique and engaging. And in just the first book I was whisked away with feelings of surprise, sorrow, joy, and so much more.

I will say, though, that this comic series is not for an underage audience. I’d definitely recommend being 17+ when reading this series. There is explicit sexual content as well as graphic violence and language, so just remember that going into this series.

I highly recommend this comic series and I give the first volume 5/5 stars.

From award-winning writer BRIAN K. VAUGHAN (Pride of Baghdad, Ex Machina) and critically acclaimed artist FIONA STAPLES (Mystery Society, Done to Death), SAGA is sweeping tale of one young family fighting to find their place in the universe. Thanks to her star-crossed parents Marko and Alana, newborn baby Hazel has already survived lethal assassins, rampaging armies, and horrific monsters, but in the cold vastness of outer space, the little girl encounters her strangest adventure yet… grandparents.

I think this second volume really just made the series better. The plot is thickening as the family races into space to escape a lot of people who were hunting after them (not that that’s going to stop them from hunting them) when they have to rescue one of the ones who came on board with them while Marko deals with issues with his mother.

Not only that, we get more backstory into some of the characters’ pasts and why and how they got to be where they are. I think this is a crucial element to the story and one that I really enjoyed.

The Will (yes, that’s his character name) is a freelancer, someone who hunts people for a price, and he’s after Alana, Marko, and Hazel. But when he arrives on Sextillion for a little side trip looking for a good time (you know what I mean), he is given to a young girl – Slave Girl – who is six years old – and he is not okay with that. He wants to rescue the girl but ends up getting kicked out before he has a chance to. I think that The Will has a lot of potential in him for either good or bad, and I’m really interested to see where his choices take him.

I think that Slave Girl is very shy at the beginning and she’s quick to please. I think that partially comes with age and the fact that she was thrust into a very sexual world. But she doesn’t let anyone touch her in that way, at least not from what we’ve seen so far.

And then we meet Gwendolyn and she’s just all about the revenge on her ex. Very fierce woman.

I really enjoyed this volume and thought it was better than the last. 5/5 stars. 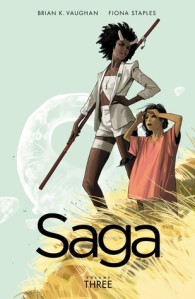 From the Hugo Award-winning duo of Brian K. Vaughan (The Private Eye, Y: The Last Man) and Fiona Staples (North 40, Red Sonja), Saga is the sweeping tale of one young family fighting to find their place in the universe. Searching for their literary hero, new parents Marko and Alana travel to a cosmic lighthouse on the planet Quietus, while the couple’s multiple pursuers finally close in on their targets.

Man, the plot just keeps getting more intense as the family is still on the run from pretty much everyone in the universe. Not only do they have their own people after them, but now the Robot Kingdom is after them, too.

There were some plot twists I didn’t see coming in this book. Plus I don’t like seeing relationships become severed over stupid things, but I understand that there’s a lot of tension going around and all of that.

There’s more and more characters being introduced, which isn’t a bad thing, but sometimes it can be difficult to keep track of. As the story progresses, though, we really see more of just who and what these characters are about and what they’re willing to fight for.

I will say, though, that all of the sexual references and content I can do without. It doesn’t all have to be eliminated, just toned down a bit.

I still really enjoyed this volume, though, and I give it 5/5 stars. 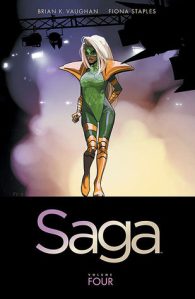 From the Eisner Award-winning duo of Brian K. Vaughan (The Private Eye, Pride of Baghdad) and Fiona Staples (Mystery Society, Thor, SAGA is the sweeping tale of one young family fighting to find their place in the universe. As they visit a strange new world and encounter even more adversaries, baby Hazel finally becomes a toddler, while her star-crossed parents Marko and Alana struggle to stay on their feet.

The family is trying to keep a low profile on a new planet as they try to make a living for themselves in this volume. Though there are a lot of struggles and a lot of bad choices made in this volume, there are some good choices made, too, but it still doesn’t stop from what the characters decide to do.

I think this was a good edition to the series, but it definitely wasn’t my favorite. I was disappointed in the decisions that Alana was making, as well as Marko, but I think that it was a learning experience for both of them to see how strong they are working together rather than trying to get through things apart.

And Hazel’s growing up! So cute!

Of course there are still people are them, and then there’s even kidnapping involved in this volume. Lots of things going on, that’s for sure. 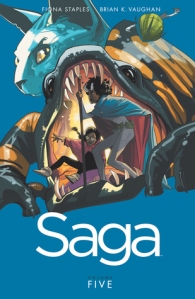 Multiple storylines collide in this cosmos-spanning new volume. While Gwendolyn and Lying Cat risk everything to find a cure for The Will, Marko makes an uneasy alliance with Prince Robot IV to find their missing children, who are trapped on a strange world with terrifying new enemies. Collects Saga #25-30.

This one was just so much action going on and so many “what’s going to happen” gripping moments that I wasn’t sure how it was going to end. This volume had a lot more fear involved on the part of the parents, but it also had a lot of strength as well as fragility.

Yes, some of the characters keep making mistakes, or decide to do the wrong thing, but they do learn from them and I think that’s the most important part.

The plot in this one was following three separate stories that would all eventually come together, minus one of them, but it was still an important plot point nonetheless.

I think that this volume was a good edition, but it wasn’t my favorite. I am sad about what happens to a couple of characters and I’m happy with a few others, but I’m also really sad that I have to wait for the next volume to come out to see what happens next! Gah!

So far, I’m really enjoying this comic book series as it’s also the first comic series I’ve ever read. The story is gripping and it’ll leave you wanting more. The art style is also really beautiful and it really helps to pull the story together. Just remember: for mature audiences.