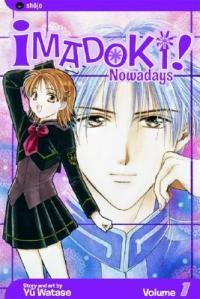 For Tanpopo Yamazaki, life at the elitist Meiô Academy seems way out of her league. The daughters of wealthy families snub her; other students make light of the fact that she actually tested into Meiô instead of relying on family connections, and the cute boy she saw tending a dandelion the day before wouldn’t even acknowledge her existence. Hoping to make friends and have some fun, Tanpopo starts up a gardening committee, but will this help her survive in a school where superficiality and nepotism reign supreme? IMADOKI follows the trials and tribulations of a budding horticulturist as she makes her way down the winding road to friendship. From Yû Watase, one of Japan’s most beloved shôjo artists, IMADOKI packs comedic charm and heartfelt antics into an adorable bouquet of whimsical fantasy.

As this is a series review there may be spoilers!

I’m going to start this off by saying: I’m biased when it comes to this series and several other Yuu Watase works. I read a lot of her works many years ago and they were some of my favorite series at the time, and still are. So of course upon rereading this series all the way through again, I loved it, but there were some things I didn’t remember that happened and when I read about them it was like I was reading with fresh eyes.

This series follows Tanpopo, a happy-go-lucky girl who moves from Hokkaido to Tokyo to join this elite school to make more friends and experience more in the world. When she first arrives, the day before school starts for the year, she runs into (more like crashes into) Koki, who was minding his own business taking care of a plant. From there it takes off and we learn many things about Koki, Tanpopo, and her serious desire to make friends.

Tanpopo is kind of a clueless person who just wants those around her to be happy because she knows what it’s like to be in a lot of pain and really sad. She’s cheerful even when she’s being bullied for being the new girl and trying to talk to Koki – who acts like a totally different person when he’s at school surrounded by others than when he was alone tending to plants. I think that she’s a very loveable character, and that she really shows her genuine feelings on the surface almost all the time. I think that’s why so many people change around her and become more friendly to her and to others, including themselves. She’s kind of the beacon of hope in this series and I think that she is a great person.

Koki is from one of the elite families in the school, and he hates it. He had a lot of responsibility dumped on him when his older brother, Yoji, runs out on the family with no hint as to where he was going. He finds that everyone in the school only wants to be close to him because of his status, and he hates that. He finds solace in plants and tending to flowers and that’s really where he shows his true colors. I think that he has a great sense of responsibility, but also a great load of guilt because he takes on the tasks of his brother that he didn’t want to take on.

Flippy is a hacker and kind of a crazy guy who can flip on anyone at any time without warning, but he’s also a fun character because not only does he cause mischief, but he really believes in what Tanpopo is trying to do and supports her as a great friend.

Tsukiko is first interested in joining the Plant Committee with Tanpopo just so she could destroy Tanpopo’s image in front of Koki, but then we learn that she just wants to be with Koki for his status and power – the way it’s handled, though, is very funny and I think that it brings a lot of hilarity to some more serious moments in the series. Also, I ship her and Flippy. Just saying.

Arisa is the last of the group to really join in and she was unwilling at first, but once Tanpopo really showed her that it was okay to do things for herself, Arisa decided to be friends with them. Also, she has a secret that they all quickly figure out, and I think that she deals with it in a very mature way.

And then there’s Erika who… I really don’t like. At all. I don’t feel sorry for her and I know she was just there to create drama, but dammit, whyyyyyyy. Ugh. She’s just… not a good person. I don’t like her. I don’t have much to say about her. I’m just glad Tanpopo doesn’t really give up on her, even after all of the crap that she puts Tanpopo through.

As for the plot, it’s a pretty simple high school drama () with developing feelings of romance, budding friendships, real life problems, and more. I think that the plot is pretty simple in comparison, but it’s one that draws you in along with the characters because you want to know what happens next with them all. I love being able to see Japanese culture represented so much through manga and this is just one of those examples. I love seeing the blossoming romance between Koki and Tanpopo, and the humor used in moments that really needed it.

I also love Yuu Watase’s drawing style. It’s honestly one of my favorites of all time, so again, I’m biased in that way. But she just makes all of her characters so pretty and memorable. ;-;

If you’re looking for a fun shoujo manga with drama, romance, friendship, and fun times, then check out this series.

Click on the individual covers below to be brought to their Goodreads page!