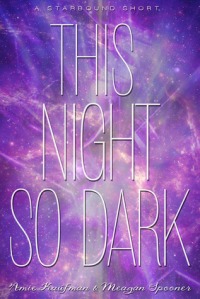 “This Night So Dark” is a novella in the Starbound series by Amie Kaufman and Meagan Spooner and tells a story after the events of “These Broken Stars” about a time Tarver was in a facility and had to escape from mercenaries while also rescuing scientists from the facility. It’s a fast-paced novella that’s only about fifty or so pages long, but there are extra pages toward the end with excerpts from “These Broken Stars” and the second Starbound novel, “This Shattered World.”

Overall the novella was fast-paced and placed in the world at a good place. As a reflection story, it definitely told about the past events as through the eyes and memory of our lead character, Tarver. His voice is dominant in this story and it reflected the flow of “These Broken Stars.”

As a sci-fi adventure, it does hold a few aspects of science fiction, such as taking place in space upon another planet, with different weapons, facilities, terms, and other such things. But it also focuses a lot on fighting and military aspects, keeping in line with how a soldier would react in certain situations.

The story itself was engaging and it kept me wanting to read more. Sometimes, though, I did feel that it dragged on in a few parts, or that a few details could have been left out, but it was overall enjoyable and a believable story within the world that the Starbound novels take place in.

A few new characters were introduced that played important roles in the story, such as a solider-mercenary, Gil, who turns out to be working for the “bad guys” in the story, and a scientist, Sanjana, helps Tarver out throughout a majority of the novella. Each is portrayed well in their respective positions and add to the story rather than take away from it.

If you’re a fan of “These Broken Stars” I suggest reading this, too. It helps to know more about the world and how the story played part in the first novel in terms of Tarver’s character.

I rate this novella 4/5 stars.