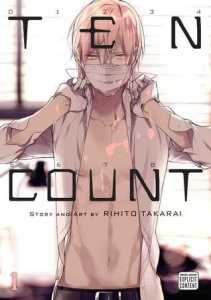 Tokyo Ghoul by Sui Ishida, volumes 1-12. Shy Ken Kaneki is thrilled to go on a date with the beautiful Rize. But it turns out that she’s only interested in his body—eating it, that is. When a morally questionable rescue transforms him into the first half-human half-Ghoul hybrid, Ken is drawn into the dark and violent world of Ghouls, which exists alongside our own.

There’s a total of 14 volumes in this series, and though the whole series is completed and I could read it all, I’m actually collecting these specific editions of the series. BUT what I’ve read of the series so far? Oh. My. God. It’s so dark and twisted and I love it.

It’s rated for older teens 16+ and with good reason because there’s a lot of blood and violence that happens in this story. Ken Kaneki goes through a lot when he suddenly becomes a ghoul after being attacked by one, and it’s pretty much his journey going through a lot of hardships, almost dying several times, and becoming stronger to save others.

Honestly, it’s one of my favorite series I’ve read and I’m glad I picked it up. It really deserves the hype it has. There’s humans who work for an organization trying to abolish ghouls, and then there are sects of ghouls who try to rise up against them. I recommend this series if you’re looking for something darker and more intense. I’m also currently watching the anime and, hoo boy, it’s intense.

Noragami by Adachitoka, volumes 1-17. Yato is a stray god. He doesn’t even have a shrine, not to mention worshipers! Hoping he’ll eventually raise enough money to build himself the lavish temple of his dreams, Yato accepts all kinds of jobs. Of course, he can’t afford to be picky; from finding lost kittens to helping a student overcome bullies, no job is too small for Yato, the god-for-hire! An eccentric story with a charming cast of characters!

This is probably one of my favorite series ever because it’s so fun but also serious at times, and omg I ship Hiyori and Yato so much like JUST KISS ALREADY, and there are other characters that I’ve grown attached to and I want to know what exactly happens with them because I’ve read up to volume 17 and so much has happened!

Yato is a god who was made through wishes and he is often forgotten if he is ever seen or helps others. And then when Hiyori sees him one day and saves him from being hit by a truck (even though the driver couldn’t see him), she then ends up almost dying and being able to slip out of her body and join Yato – and eventually Yato’s shinki [weapon], Yukine – on their jobs and adventures. It’s such a great story that doesn’t fail to make me laugh and be suspicious of so many characters and their true intentions.

Seriously check this series out. It’s so good and very addicting. Plus the art style is really nice to look at.

Ten Count by Rihito Takarai, volumes 1-6. When the President got into an accident, Shirotani Tadaomi met Kurose. On their very first meeting, Kurose could tell right away that Shirotani is Mysophobic and said that it’s pretty bad while suggesting it would be better to consult a doctor about it. Shirotani was left perturbed by the encounter. Who is Kurose? And how was he able to tell Shirotani’s condition?

This is a yaoi series which means lots of boy/boy love and sex, and I’m really enjoying this series. At least, up until the last few chapters because now I feel like Kurose is really just using Shirotani and it’s not healthy and just… yeah… But anyway, up until that point, it was hot and steamy and it was nice to see Kurose wanting to help Shirotani with his mysophobia, and Shirotani is making progress, but I hope events don’t escalate and he becomes worse than before. 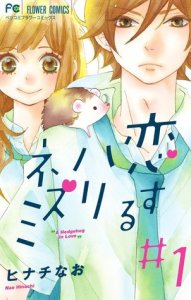 Koisuru Harinezumi by Nao Hinachi, volumes 1-3. To change from ‘like’ to ‘love’, what strategies must Ozawa use on Kazuki? Kazuki Heiji is the troublemaker. He gets into fights and is very cold to everyone. Ozawa Kii witnesses a fight between a classmate and Kazuki but he unexpectedly says he wants to become friends? And what’s this about ‘like’ and ‘love’.

Ahhhh the cutenessssssssss. This is a shoujo manga, meaning it’s more tailored toward girls with romance and all of that, and I love shoujo manga, so this was right up my alley. The art style is very lovely and the story is a cute one of a scary guy, Kazuki, who is approached one day by a sweet girl, Ozawa, to turn in an assignment, and they soon find themselves in a friendship. But Ozawa slowly starts to fall for him and things just kind of get more complicated from there in ways but sweeter in others.

If you need a light hearted read with cute feels, definitely check out this series. It’s super cute and yeah, the story isn’t original, but who cares? Still so many feels.

Tsubaki Chou Lonely Planet, chapters 1-33. Ohno Fumi is a poor 2nd year high school student. Because of her father’s debts, she’s kicked out of her own home and has to rely on her own connections to survive. Thus begins her life as a live-in housekeeper for a reclusive writer…

Ahhhh I can’t even with this seriessssss. It’s too cute and I simply love it. When Fumi becomes a housekeeper to a reclusive writer, Akatsuki, she slowly develops feelings for him. And there’s a lot of silly moments and cute moments and then THE CONFESSION. AHHHH dying of the cuuuuuute. Okay, sorry, it’s very fresh in my mind as I just finished reading all of the updated chapters online that I could find. But yeah, another light hearted read for you to check out if you’re interested!

Nanairo Sekai, volume 1 – four short stories. 1) The Glasses Thief
A boy with bad eyesight and the girl who is in love with him.

2) Convenience Store Honey
A boy worries about his quiet boyfriend.

3) Adult-Uniform
A girl wonders why her childhood friend does not speak to her anymore.

4) Refrigerator Chocolate
Satoru is going to have heart surgery with a 50/50 chance of surviving. One day he comes across a girl in a refrigerator…

This manga consisted of four short stories, each with some form of love in it, and it was just so bitter sweet reading them. They all deal with some small hardship that they have to overcome in some way, and I think that that brings the characters closer together. If you’re looking for a feel-good, but still kinda bitter sweet, read then check out this manga.

Living no Matsunaga-san, chapters 1-2. Miko leaves the house of her parents to live with her uncle who runs a boarding house, but her first meeting with Matsunaga-san isn’t good and then he discovers that she is one of her uncle’s tenants. Even as a secondary student she surrounds herself with university students who have a very different life from her own. Can she fit into her new home?

Whyyyyy are there only two chapters translatedddddd!? I need more nowwwwwwww. Seriously, there’s something about this manga and I just NEED MORE. The art style is a good one, the story seems like it’s going to be fun, the main leads are interesting… Ugh. Give me more! I want to see their relationship grow, please, thanks… Even though there’s only a few chapters out right now, definitely check out this story when you can. Super cute and funny.

Hirunaka no Ryuusei, chapter 1. 15-year-old country girl, Suzume Yosano, has to move to Tokyo to live with her uncle due to her father’s transfer. She bumps into a mysterious man who ends up taking her to her uncle’s place after she gets lost. Turns out, Suzume will be seeing him a lot more often once she starts school because… he’s her homeroom teacher!?

Okay, love stories between teacher and student seem to be popular right now, where the student is 16/17 and the teacher is in their early 20’s and I don’t know what it is about it, BUT I’M DIGGING IT. AHH. And I’ve only read the first chapter of this manga but I can tell I’m already going to be intrigued because it just has a lot of elements that I’m interested in and I know I’ll enjoy. More thoughts will come once I’ve read more.

Smokin’ Paradise by Jinsei Kataoka & Kazuma Kondou, volume 1. Youkou lives in a future where organ transplants are common and available to all, but life’s not as idyllic as it seems–it turns out a nefarious organization is using that technology for their own evil ends! Only the elite squad Jackalope has any chance of stopping them before it’s too late.

Okay, this one is much more intense than the previous ones I’ve talked about because it’s a shonen series, which means it’s geared toward boys, and therefore there’s more explosions and death and gutting and machines…. Anyway, this story has my interest piqued because so many things happen and I have so many questions about the main character and his history and why he is the way he is and what’s going to happen next. As far as I know only the first volume is out, but it’s really good. Violent, but good.

Mayoke no Darling by Puku Okuyama – chapters 1-4. At the university’s badminton club’s freshmen welcome party, everyone is scared stiff when the scary-looking Tougo introduces himself. The fearless (or maybe just clueless) freshmen Haruka ends up sharing a taxi home with Tougo… and while everyone else trembles in fear before him, Haruka finds him handsome.

SUCH A CUTE YAOI, OMG. I almost forgot to add this to my list but even though there’s only a few chapters out right now, this was still very cute. It’s simple and sweet boy love and cute and makes me happy. Especially since it’s like the “scary looking” dude with the SUPER cute guy who’s all bubbly and kind of airheaded. Commence the warm fuzzies, I clearly can’t coherently write anything about this without squeeing.

So that’s most of what I’ve read so far in the last few months. There is another series or two I started and got a decent way through but I can’t remember their names. #fail

Anyway, let me know if you’ve read any of these manga and what your thoughts were! Have any recommendations? I’d love to hear them!